Worm farms are a good way to compost. Composting your garden and food waste has many benefits and is quite easy to do. It keeps waste from landfills, provides nutrients to your plantings and improves the drainage and moisture absorption of your soil. It also reduces the amount of fertiliser and pesticides needed to grow healthy plants.

Worm farms are relatively simple to make and care for. The worms used are tiger worms, available from some garden centres and other specialist outlets.

How to make a worm farm

What to put in

The worms will eat food scraps (cooked and raw), tea bags, coffee grounds, bread and other organic waste but limit the quantity of citrus, onions and garlic. They will eat their body weight in food every day.

Keep out meat, dairy and oils.

Care for your worm farm

Check the conditions of the worm farm when you put the food in. When a reasonable amount of worm compost (or castings) has been formed move the bedding to one side and put in new bedding and food on the cleared side. Leave for a few days for the worms to migrate to the new bedding and food. Remove the old bedding which is now ready to use as fertiliser. If your worm farm is in a bath the liquid wastes (worm tea) can be collected in a bucket under the plughole. This can be used as a very effective fertiliser by diluting, if necessary, until it is the colour of weak tea. Pour warm tea on the ground around plants to fertilise rather than on leaves. 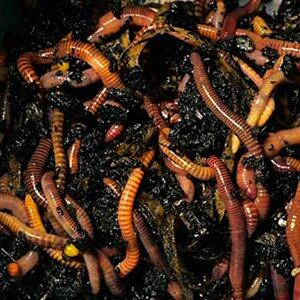