The Hypercar takes a sustainable approach to car design. It is super-light, super-low drag and therefore needs a much smaller hybrid or plug-in electric motor.

Cars are very heavy. They are made of steel and require huge engines to get them going. The irony is that a bigger engine just adds more weight and therefore needs even more energy to move it. A heavy car also needs power steering, power brakes and extra fuel on board which adds to the weight.

The bulk of innovation for efficiency has focused on the drive train but much more efficiency can be gained by reducing the weight of the car.

By reducing the weight of a car by one kilogram you can actually reduce it’s weight by a kilogram and a half because it will need a lighter structure, less suspension, smaller brakes, smaller engine and less fuel on board.

The Hypercar, the brainchild of Amory Lovins, is designed to take advantage of super-efficiencies and involves: 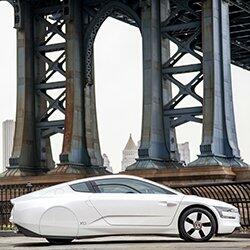