Straw is a bi-product of the food production industry. This versatile and sustainable material has been used for thousands of years for bedding, basketry, fuel, construction (thatching, cob) and animal feed.

Straw is a bi-product of the food growing industry. For thousands of years it has been used in house construction, as stuffing for mattresses and upholstery, for basketry, as a fuel and as bedding and feed for horses, cows and pigs.

There are many sustainability benefits to using straw as a material resource. Like any organic material it is environmentally benign and it sequesters carbon. Like wood and other biomass it is carbon neutral if it’s burned as long as it is grown back.

As a bi-product it is a cheap material with a wide variety of uses some of which are described below.

The uses and benefits of straw

Straw has little calorific value but it is fed to domestic animals as part of the roughage component of the diet when they are on or near a maintenance level of energy requirement. Due to the risk of impaction and its poor nutrient profile, it should always be restricted to part of the diet. It may be fed as it is, or chopped into short lengths, known as chaff.

Bee skeps (hives), baskets and other containers, furniture and matting are made from coiled and bound together continuous lengths of straw. The technique is known as lip work.

The traditional straw-filled mattress, also known as a palliasse, is still used in many parts of the world.

It is commonly used as bedding for ruminants and horses. This bedding can then be composted after it has been replaced.

It’s use as a carbon-neutral energy source is increasing rapidly. Briquettes are a biofuel substitute to coal.

It’s use in large-scale biomass power plants is growing in Europe, with several facilities already in operation. It is either used directly in the form of bales, or densified into pellets which makes it more efficient for the feedstock to be transported.

In many parts of the world, it is used to bind clay and concrete. A mixture of clay and straw, known as cob, has been used as building material for many centuries.

Simple houses can be created with straw bales. If made correctly, the bales will provide excellent protection against the elements.

When baled, it has good insulation characteristics. Bales can be used alone to make house walls, or as part of post-and-beam construction. When bales are used to build or insulate buildings they must be rendered, this usually done with earthen plaster. The plaster adds some thermal mass, structural strength and acceptable fire resistance.

Wheat straw can be used as a polymer filler combined with polymers to produce composite wood.

Enviroboard can be made from straw. Construction panels, like enviroboard, built from agricultural wastes have been around for hundreds of years, especially in Central and Eastern Europe where pressed leaves and straw were used as insulation and even structural material.

Strawblocks are strawbales that have been recompressed to the density of wood blocks. This makes them more efficient to transport and also add strength and solidity to load-bearing walls.

There are several styles of woven straw hats.

It is also used in cucumber and mushroom cultivation.

In Japan, it is wrapped around certain trees to protect them from the effects of a hard winter as well as to use them as a trap for parasite insects.

It is also used in ponds to reduce algae by changing the nutrient ratios in the water.

The soil under strawberries is covered with straw to protect the ripe berries from dirt, and it is also used to cover the plants during winter to prevent the cold from killing them.

Straw is resistant to being crushed and therefore makes a good packing material. It is used in compostable food packaging and will biodegrade in a commercial composting environment.

It can be pulped to make paper.

Rope made from straw was used by thatchers and in the packaging industry. 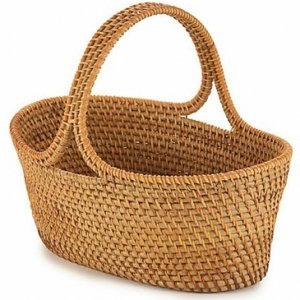 A straw basket made using the lip-work technique