Rainwater harvesting is the collection and storage of rain from roofs or from a surface catchment for use in the home or garden.

Rainwater harvesting is the collection and storage of rain from roofs or from a surface catchment for use in the home or garden. The water is generally stored in rainwater tanks (also known as water butts) or directed into mechanisms which recharge groundwater. In New Zealand houses away from municipal water supplies often rely on rainwater collected from roofs as the only source of water for all household activities. This is usually the case for many holiday homes as well.

There are a number of types of systems to harvest rainwater.

As rainwater may be contaminated, it is often not considered suitable for drinking without treatment. However, there are many examples of rainwater being used for all purposes — including drinking — following suitable treatment.

A diverter is often used to divert the initial flush of rainwater, containing most of the debris from the roof and pipes, goes to waste. Meshes stop insects from breeding. Water can be treated with UV light to kill pathogens and filtered to remove heavy metals.

Collecting rainwater on your property helps alleviate the amount of runoff into sewerage and stormwater systems.

Unlike urban areas, a significant proportion of rainfall in natural watersheds is absorbed into soils (infiltration), stored as groundwater, and slowly discharged to streams through seepage and springs. Flooding is less significant in these natural conditions because some of the runoff during a storm is absorbed into the ground, thus lessening the amount of runoff into streams and rivers.

In built up areas, much of the vegetation is replaced by impervious surfaces, thus reducing the possibility of groundwater infiltration. In this situation, more stormwater runoff occurs—runoff that must be collected by drainage systems that combine gutters, storm drains, and ditches to carry stormwater runoff directly to streams. More simply, in a developed watershed, much more water arrives into a stream much more quickly, resulting in an increased likelihood of more frequent and more severe flooding.

Runoff from agricultural and built-up land can carry excess nutrients, such as nitrogen and phosphorus into streams, lakes, and groundwater supplies. These excess nutrients have the potential to degrade water quality.

The problem with stormwater runoff

As it flows over the ground, stormwater often picks up pollutants that may include sediment, nutrients (from lawn fertilisers and animal waste), bacteria (from animal and human waste), pesticides (from lawn and garden chemicals), metals (from rooftops and roadways), and petroleum by-products (from leaking vehicles). Polluted stormwater runoff can be harmful to plants, animals, and people. 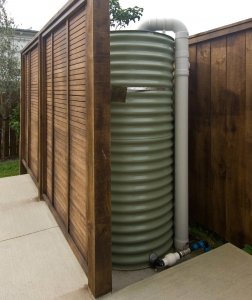