Linen has been used for thousands of years for clothes, bedware and furnishings. It is loved for its soft and cool feel. It is a very strong and durable material which will last much longer than other alternatives, like cotton.

Linen is a textile made from the fibres of the flax plant*, Linum usitatissimum. The fibre is very absorbent and garments made of linen are valued for their exceptional coolness and freshness in hot weather. Linen drapes well, takes dye easily and develops a soft lustre over time. It’s easy to sew, feels good next to the skin, and it lasts for years.

The process of growing flax and turning it into fabric hasn’t changed much in the past several thousand years. Linen has a rich history, dyed linen fibres that are 36,000 years old have been found in a cave in Georgia. The linen wrappings of 3000 year old mummies survive to the modern day.

The flax plant grows best in cool, damp conditions and grows well on relatively poor soil. Flax requires a small fraction of the water that cotton requires, and uses very little fertiliser, if any.

Flax is a bast fibre, meaning the threads or fibres used to make fabric run the entire length of the stem. Pulling the plant from the ground ensures the longest possible threads (which are called staples). Longer staples mean a stronger, higher-quality fabric. In the past the plants were pulled by hand but pulling is mostly done by machine now. In some places the plants are mown.

Once the plants are pulled, the flax stems must be “retted.” The stems are left on the ground for days or weeks and the tough outer stems rot away. An alternative method involves steaming the stems rather than rotting them.

After retting the softened stems are beaten to release the soft linen fibres. There is no complicated chemical process. Just pound it and comb out the fibers. The modern method is the same, though it’s performed by large machines rather than a human arm.

Linen is one of the strongest plant fibres, two to three times stronger than cotton. This means that products made from linen are very durable. It’s simple – if you make a garment that lasts longer, you will need to replace it less often, which reduces consumption. Regularly used cotton sheets, if looked after, might last for about five years. Linen sheets could last for 25 or more years.

Linseed oil, also known as flaxseed oil, comes from a different variety of the same plant that linen fibre is made from. Linseed oil is a drying oil, meaning it can polymerise into a solid form, and because of this linseed oil has many uses. It can be used on its own or blended with combinations of other oils, resins or solvents as an impregnator, oil finish or varnish in wood finishing. It can be used as a pigment binder in oil paints and as a plasticiser and hardener in putty. It was traditionally used in the manufacture of linoleum. Linseed oil use has declined over the past several decades with increased availability of synthetic resins.

Linseed oil is an edible oil and is a good source of α-Linolenic acid (an omega-3 fatty acid) which is one of the two essential fatty acids we need in our diets.

New Zealand flax describes the very common native plants Phormium tenax and Phormium colensoi, known by the Māori names harakeke and wharariki respectively. Whilst they are given the common name ‘flax’ they are quite distinct from the Northern Hemisphere plant known as flax(Linum usitatissimum)that is described above.

Before European settlement and subsequent import of alternative materials and methods the leaves and fibres of the New Zealand flax were used by Maori in a myriad of application. They used flax to make eel traps (hinaki), huge fishing nets (kupenga), fishing lines, bird snares, ropes, containers, bags (kete), mats, clothes, sandals (paraerae), buckets, food baskets (rourou) and cooking utensils, as well as many other uses. 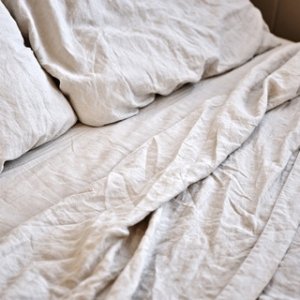