Ecological Footprint is essentially a measure of human consumption.

Ecological footprint analysis compares human demand on nature with the biosphere’s ability to regenerate resources and provide services. Globally the ecological footprint is larger than the earth’s biocapacity (sometimes referred to as ‘carrying capacity’) by about 50%
and this margin is growing.

Ecological Footprint measures humanity’s demand on the earth’s productive capacity. This productive capacity, known as biocapacity, is the area of biologically productive land and sea required to provide the resources humans use and to absorb our waste. It includes all the cropland, grazing land, forest, and fishing grounds required to produce the food, fibre, and timber people consume. Ecological Footprint also includes the land required to absorb emissions from the energy people use, and to provide space for our infrastructure including roads and built areas.

According to the National Accounts for the year 2014, the total Earth’s biocapacity is estimated at 1.7 global hectares (gha) per person but humanity’s Ecological Footprint has reached 2.6gha per person. Correspondingly, the number of planets demanded by all humans is now 1.53 planets and growing.

People consume resources and ecological services from all over the world, so their footprint is the sum of these areas, wherever they may be on the planet. That is why ecological footprint and biocapacity are both measured in global hectares. 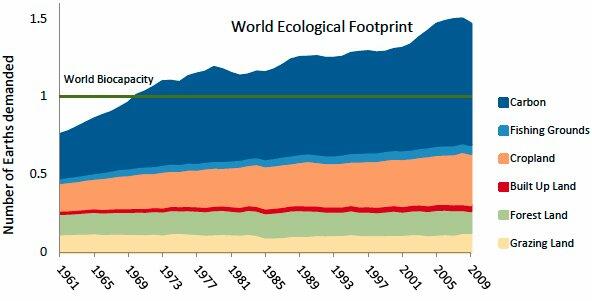 Separating the Ecological Footprint into its individual components demonstrates how each one contributes to humanity’s overall demand on the planet. Globally, the Carbon Footprint was the fastest growing component, increasing more than ninefold from 1961 to 2003.

Humanity’s footprint first grew larger than global biocapacity in the 1960s; this overshoot has been increasing every year since, with demand exceeding supply by over 50 per cent in 2014. This means that it took approximately a year and six months for the Earth to produce the ecological resources we used in that year.

How is it possible for an economy to continue operating in overshoot? Over time, the Earth builds up ecological assets, often called natural capital, like forests, fisheries and soil. These accumulated stocks can, for a limited period, be used faster than they regenerate. CO2 can also be emitted into the atmosphere faster than it is removed, accumulating over time.

For more than four decades we have been in overshoot, drawing down these assets and increasing the amount of CO2 in the air. We cannot remain in overshoot much longer without depleting the planet’s biological resources and interfering with its long-term ability to renew them.