“I don’t know what the answer is. In time man gets used to almost anything, but the problem seems to be that technology is advancing faster than he can adjust to it. I think it’s time we started applying the brakes, slowing down our greed and slowing down the world.”

Richard (Dick) Proenneke (1916 – 2003) is a modern day Henry David Thoreau. Having built his own cabin next to a lake he went on to document his household ‘economy’ in words and, unlike Thoreau, also in film and photos.

When he was a young man Dick contracted rheumatic fever and was bedridden for nearly six months. This experience motivated Proenneke to devote the rest of his life to the strength and health of his body. Dick, born in Iowa USA, worked as a carpenter, sheep farmer, fisherman and mechanic before deciding to ‘retire’ at the age of 51 to the remote Twin Lakes in Alaska.

On May 21, 1968, Proenneke arrived at his new place of retirement at Twin Lakes. He spent the next 16 months there building and outfitting a log cabin using only hand tools, some of which he made. After going home for a time to visit relatives and secure more supplies he returned to the lakes in the following spring and remained there for most of the next 30 years.

He made a film record of his solitary life when he was building his cabin, which was later made into a documentary, entitled Alone in the Wilderness (see YouTube clip below).

Proenneke hunted for meat and grew vegetables. Supplies had to be flown in from time to time. Living alone, and not seeing people very often, Dick filled his time by keeping meteorological records and monitoring animal as well as human movements (especially hunters) in the area for the National Park Service.

Not many people could endure Dick’s reclusive life alone in a very hostile environment. Whilst Dick’s experiment in self-sufficiency is extreme his life on the Lakes proves that a person can live a very simple, natural life and be healthy, happy and fulfilled.

Some of Dick’s reflections in his book Alone in the Wilderness are very pointed and help to explain his philosophy on life.

“Needs? I guess that is what bothers so many folks. They keep expanding their needs until they are dependent on too many things and too many other people.”

“I’ve seen grown men pick at food. They can’t be hungry in the first place. Or maybe their food has been too fancy and with all the choice’s they’ve had they don’t really know what they enjoy any more.”

“What a man never has he never misses.”

“I enjoy working for my heat. I don’t just press a button or twist a thermostat. I use a big crosscut saw and the axe, and while I’m getting my heat supply I’m working up an appetite that makes simple food as appealing as anything a French chef could create.”

“Eight and a half miles can be covered in minutes in a car on an expressway, but what does a man see? What he gains in time he loses in benefit to his body and mind.”

“Nature provides so many things if one has the eye to notice them. It is a pleasure to see what you can use instead of buying it all packaged and ready-made. Several stumps with just the right flare gave me my wooden hinges…I found spruce cones to be as effective as Brillo pads or steel wool to scour my pots.”

“I do think a man has missed a very deep feeling of satisfaction if he has never created or at least completed something with his own two hands. We have grown accustomed to work on pieces of things instead of wholes…How does a man on an assembly line feel any pride in the final product that rolls out the other end?”

“I have found that some of the simplest things have given me the most pleasure. They didn’t cost me a lot of money either. They just worked on my senses. Did you ever pick very large blueberries after a summer rain Walk through a grove of cottonwoods, open like a park, and see the blue sky beyond the shimmering gold of the leaves? Pull on dry woollen socks after you’ve peeled off the wet ones? Come in out of the subzero and shiver yourself warm in front of a wood fire? The world is full of such things.” 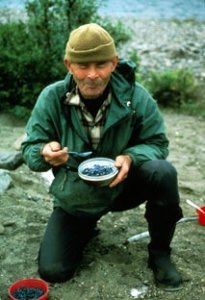