Capital and the
profit motive

A capitalist economy is a market system where goods are produced and sold for profit. The profits gained tend to be invested in capital, in the form of producer goods, things such as factories, machines, tools and other productive resources. It is easy to see that this continuous reinvestment of profits leads to the growth of production. This growth is compounding because there is growth on top of previous growth. It is also easy to infer that wealth in a capitalist economy always tends towards more inequality because capital begets capital. The economist Thomas Piketty performed a meta-analysis of economic research throughout he world. He concluded that in recent times returns on capital (or profitability) is higher than overall growth in the economy. This is another way of saying that the rich get richer and the poor get poorer (relatively at least). A higher level of wealth inequality in a society has been correlated to higher levels of social ills like crime, obesity and mental illness.

Systematic growth harms people and planet in a variety of ways and it must be controlled for the well-being of all. If most investment is in pursuit of more profit, harm will be done. If most investment is for the well-being of people and planet then humanity will stop painting itself into a corner and improve conditions for all life. 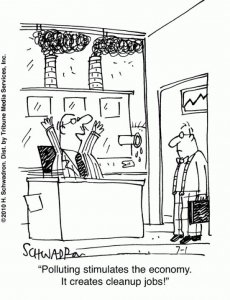